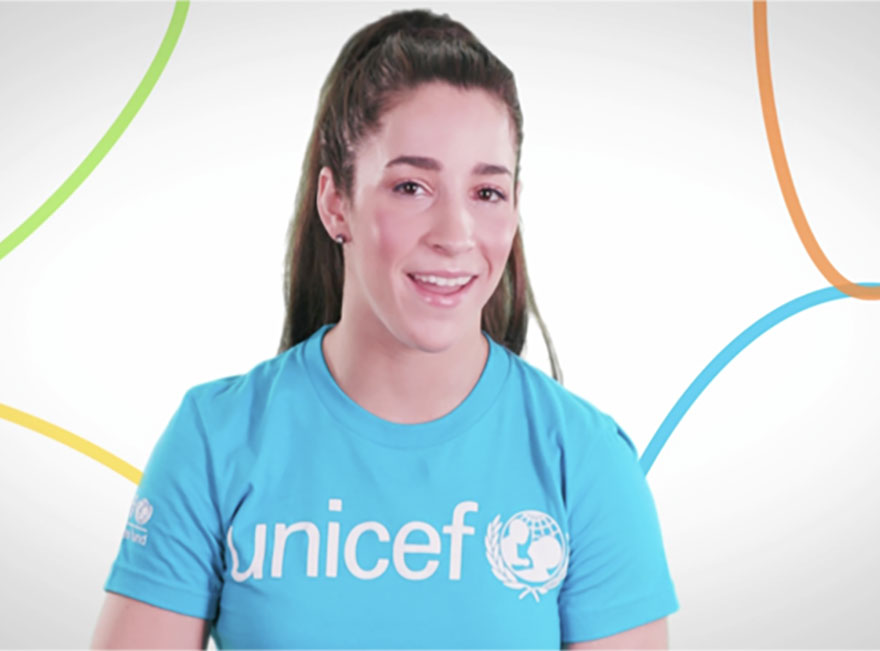 Go on a Mission with Aly Raisman, 6x Olympic gymnastics medalist, who tells the story of millions of child refugees and what it is they need to be happy and healthy.

Aly Raisman was born in 1994 and is a proud and already-legendary American gymnast who has already been in the Olympics two times! She was the leading captain on the famous 2012 “Fierce Five” team as well as the also-famous 2016 “Final Five” U.S. Women’s Olympic gymnastics teams – both of which won their tournaments and brought home the gold.  which won their respective team competitions.

In the London Olympics in 2012, Raisman won gold medals in both the team and floor competitions. She also competed in the balance beam competition and took home the bronze medal. This made her by far the most decorated American gymnast medalist at the 2012 Olympic Games. In 2016, Raisman also won gold and silver. She is now a household name due to her incredible success as an Olympic gymnast, and is an inspriation to active kids all over the world.

Aly has an incredible memory, according to her mom, and has the ability to remember minute details and faces. Says her mom, “I’ve been with her on the beach, and she’ll say to me, ‘That’s the judge from Level 4, and this is the score she gave me on beam.” We wonder if this incredible memory has helped serve her well in the gym. Considering her gold and silver medal collection, the answer is probably yes!

Hi, I’m Aly Raisman, world champion gymnast and UNICEF Kid Power Champion. All around the world, families are forced to leave their homes. When children are displaced, their risk of malnutrition is very high. These families are facing incredible challenges. But we can do something about it. Are you ready to help kids around the world by getting active?

More From the Blog

Teaching sensitive topics isn’t easy. But with a bit of preparation and some clear ground rules, you can provide some comfort and support to your students, while helping them learn to listen actively, present their thoughts constructively, and reflect deeply to think critically.

Teaching sensitive topics isn’t easy. But with a bit of preparation and some clear ground rules, you can provide some comfort and support to your students, while helping them learn to listen actively, present their thoughts constructively, and reflect deeply to think critically.

Build student relationship skills and social awareness with three engaging videos featuring some of your kids’ favorite stars who are using their voices to speak out against racism, stand up for equality, and create a vision for changing the world.